July 21st 2008 saw the burgeoning space of Hindi General Entertainment Channels (GEC) expanding with the launch of Colors, an offering from the Viacom18 (a 50:50 joint venture between Viacom and Network18) stable. The channel performed extraordinarily and led experts to wonder at the why’s and how’s of Colors, the King-in-waiting. We have done a small study to satiate those questions.

Colors created an initial buzz with the Akshay Kumar hosted reality show, Fear Factor – Khatron Ke Khiladi (KKK). What KKK did was target the age group 14-34 with its new daredevil show. That age group is most open to experimentation and is not averse to flirt with their choices. The show format and the celebrity factor (the contestants as well as the host) helped build valuable viewership awareness.

That awareness transcended into unprecedented loyalty and we are here to analyze Colors’ spectacular rise in this competitive space. As we are engaged in this effort, Colors is the No 2 GEC in HSM Markets (TAM data for week 10 – 1 to 7 March) snapping at the heels of Star Plus.

The summarized analysis can be put forward thus: “Differentiated Content and Disruptive Scheduling”. Looking beyond the obvious let us delve into some of the finer points which helped Colors in its stupendous rise.

Promotional Strategies during launch:
In its efforts to become the market leader, Colors had undertaken innovative promotions targeting Hindi speaking audience in 90 Indian cities. The points below are some of their extensive marketing and promotional initiatives.

A good mix of convention and innovation coupled with the content of its shows ensured a bombastic entry for Colors into the viewer’s paradigm.

Distribution Strategy:
The clinching factor in Colors’ favor was, according to many, its brilliant distribution strategy. The channel is currently available in 66.8 million homes, with a 24% market share. It has 200 of the 280 advertisers in this space on board. Very impressive figures indeed.

Atul Gupta, an independent cable distribution expert, considers Viacom’s distribution strategy to be 99% responsible for the success of Colors. “The channel is a distribution success. Period,” he says.

In an interesting strategy, Viacom18 is said to have given away Rs 100 crore as carriage fee for a year to get the best band for its channel. Its budget was clearly much higher than the Rs 40-60 crore that NDTV Imagine and 9X reportedly invested in their distribution. The results show!

Programming Strategy and Performance:
As mentioned before, Colors first targeted the 14-34 age group; first with KKK then with Bigg Boss 2. Bigg Boss 2 was a hypothetical winner anyway considering the amount of controversy associated with its host Shilpa Shetty and the participants – Rahul Mahajan, Monica Bedi and the like.

The next challenge in its wake was to get the core audience of women between 25 and 44 years, who were hooked to other established channels, to sample the new channel. Colors started advertising its mass market shows, Balika Vadhu and Jai Sri Krishna in a big way during Bigg Boss 2 and KKK.

It also cleverly timed the various programmes based on the assumption that most homes have only one television set. So Balika Vadhu and Jai Sri Krishna were shown between 8 pm and 9 pm, and Bigg Boss 2 after 10 pm. In its strategy to avoid confrontation with the existing players, and thereby build viewership base, it succeeded.

The launch episode of Fear Factor recorded a TVR of 1.72, which went up to 3.3 in the finale. The serials on Colors – Balika Vadhu, Jai Sri Krishna and Mohe Rang De also gained immensely due to the action hero’s muscle.

Although KKK and Bigg Boss 2 gave the channel its hype, its serials Balika Vadhu and Jai Sri Krishna delivered the ratings. It was a classic case of transferring of viewer’s loyalty. Moreover the strategy used by Colors in using repeat telecasts to garner GRP’s had a positive side effect as well. It built loyalty and also ensured that new prospective viewers catch up on the storyline at leisure.

The performance drivers are the huge markets of UP, Maharashtra, Rajasthan, Gujarat and MP. Interestingly Star Plus received jolts in Maharashtra, Rajasthan and WB. The reasons could be proliferation of local GEC’s or the poaching of Colors. Colors, though, has conclusively dealt a blow to the likes of Sony, Imagine and 9X.

Another interesting source tapped by Colors in its quest for GRP’s was Movies. The strategy in this case was the showcasing of recent blockbusters at non-conventional times. Slots of 4 PM on weekends were chosen. Another example of Colors’ strategy of avoiding confrontation yet succeeding. Colors initially started with a couple of movies per day in the weekends. Currently the number has greatly increased. Weekends are full of movies (both Prime and Non-Prime Time) and Week Recaps of its serials. The TRP’s gathered are also pretty good. Welcome (the highest rated movie on Colors) gathered a TRP of 3.01%.

Luck played its part too!

The demise of the erstwhile hugely popular K serials in Star Plus resulted in new focus on the fresher serials in the Colors bouquet esp. Balika Vadhu.

The Producers Strike (46th to 48th Week 2008) saw Colors toppling Star Plus for the first time in 8 years and maintain its top dog status for 3 weeks (the duration of the strike). This was due to the fact that Colors had the only fresh content to offer in the form of Bigg Boss 2. Also the repeats of its relatively new shows attracted attention as viewers thought they could catch up on the stories so far, much easier.

Graphical Analysis of Color’s Performance
To wrap up let us give a timeline to Colors’ performance. The graph below shows us how Colors rescued the genre from definite drops in Channel Share (%). 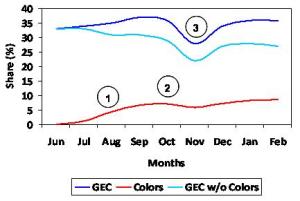 In conclusion, let us summarize what Colors did to enable such a pedestal.

Colors did manage to become number 1 in the 9th week (Feb 22 to 28) albeit with a very slender 3 GRP lead over Star Plus. Testament to the dynamic rise this channel has achieved in such a short period of time.

I am Indranil Datta(alias ID). This blog is to capture the recent trends in media and communication world. Also to share my views and learning on varous subjects related to changing media scenario.